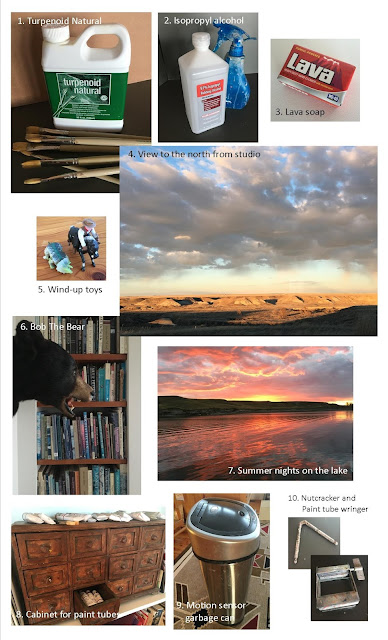 1. TURPENOID NATURAL: I couldn't do without this brush cleaner. I'm not great at cleaning my brushes regularly but all I have to do is put disgusting and hard brushes to soak and then wash up with soap and water.
2. ISOPROPYL ALCOHOL: Another cleaning trick that helps keep the studio a little nicer. I keep a spray bottle of the stuff handy for cleaning the palette and anything else that needs it such as the phone, garbage can and even the wood floor.
3. LAVA SOAP: This is my go-to soap in the studio - great for hands, brushes and getting paint out of clothes.
4. VIEW TO THE NORTH FROM STUDIO: I think I can see Canada from the studio.
5. WIND-UP TOYS: These usually live on the model stand where they have lots of room to move around.
6. BOB THE BEAR: Bob guards the entrance to my studio - a mascot I inherited from my artist friend Sheila Rieman.
7. SUMMER NIGHTS ON THE LAKE: I can see part of the lake from my studio (along with Canada) but there is nothing better than watching the sunset from the boat.
8. CABINET FOR PAINT TUBES: I found this in a California equestrian center gift shop while teaching a workshop for Disney Imagineering. The drawers are a perfect size for holding paint tubes.
9. MOTION SENSOR GARBAGE CAN: All I have to do is get my hand near this thing and it opens automatically. Life is good.
10. NUTCRACKER & PAINT TUBE WRINGER: The nutcracker is perfect for opening a tube lid that's stuck and the wringer has been keeping my paint tubes under control for more years than I care to count.
Posted by Carolyn Anderson at 3:06 PM No comments:

Wondering what you may have missed or interested in reminding yourself what you may have already read? Well, here it is – a very brief summary of previous posts. And a thought for the coming New Year – let’s all try for more poetry and music in our painting.

Myths and realities of creating a painting
Myth: There is a list of rules to follow. Most so-called rules are suggestions. They are not written in stone and what works for one person may not work for the next. Question everything.
Myth: Paint what you see. Kernel of truth and can be helpful. Unfortunately we don’t necessarily see everything and just because we see something doesn’t mean we should paint it. Question what you see and, for heaven’s sake, edit.
Myth: What we think we see is the whole truth. This is another seeing problem. If you want to see more information, you need to look for more information.
http://carolynandersonartist.blogspot.com/2014/08/myths-and-realities-of-creating-painting.html

Rendering vs. creating
Does the process of managing a painting interfere with the journey of creating a painting? Creating a painting is the selective and interpretive use of information. Embrace the opportunity of seeing a painting as an illusion or interpretation of reality instead of a re-creation.
http://carolynandersonartist.blogspot.com/2014/09/rendering-vs-creating.html

More myths and realities
One of the biggest myths is that painting is all about skill, a craft to be mastered with long and arduous study. The reality is painting is a combination of skill and creativity. Painting requires certain skill sets which can be learned with time and practice, but creative painting also requires that artists explore the boundaries of their perceptions.
http://carolynandersonartist.blogspot.com/2014/10/more-myths-and-realities.html

Is it a door or a doorway?
Ever forget what you went into a room for? Event boundaries are transition areas (such as walking through a door from one room to another) where the brain files away information in preparation for new information. I think too many hard edges, especially when starting a painting, create event boundaries and prevent artists from connecting the visual information into one coherent whole.
http://carolynandersonartist.blogspot.com/2014/10/is-it-door-or-doorway.html

The quack in the grass
Visual experience is more than our eyes sending signals of contrast and color to our brains. What we see is a combination of what we know and what we expect to see. It is our past and present, our memories and our sense of space and place.
http://carolynandersonartist.blogspot.com/2014/10/the-quack-in-grass.html

The problem with edges
Seeing is visual processing, not just image transmission. The problem with edges has to do with how the brain processes visual information. Our visual system is wired to see the most obvious changes and to filter out extraneous information not considered as necessary. We are more likely to see information that separates one object from another than we are to see the information that connects things.  Edges are not arbitrary, and edge variety is not just a device used by artists to suggest three dimensions. Edges, lost and found or hard and soft, define our three-dimensional reality.
http://carolynandersonartist.blogspot.com/2014/11/the-problem-with-edges.html

Garbage in, garbage out
Listening to someone talking on a cell phone is annoying. Why? Because it is difficult to process incomplete information and information that doesn’t make sense. We are wired to make sense of the world – to recognize patterns and organize information. Painting also requires pattern and organization, but organization doesn’t begin and end with the placement of objects. Finding patterns and organizing information in a painting is dependent on value, shapes, and color.
http://carolynandersonartist.blogspot.com/2014/12/garbage-in-garbage-out.html

A Christmas story
A true story about a horse sculpture, a Christmas tree, two deer, and the magic of Christmas.
http://carolynandersonartist.blogspot.com/2014/12/a-christmas-story.html

Why naming the “thing” can be a problem
Vision is a process, not a picture. When we name the thing, we are compromising the integrity of the visual information. We are more likely to see what we think we know and what we expect to see. We are less likely to see specific and accurate visual attributes, such as shape, color, value, and edges.
http://carolynandersonartist.blogspot.com/2015/01/why-naming-thing-can-be-problem.html

Everything you need to know about painting
A workshop handout I have been using for many years - short and easy to remember.
http://carolynandersonartist.blogspot.com/2015/01/everything-you-need-to-know-about.html

Anderson workshop – a short version
An insightful and humorous poem written about one of my workshops.
http://carolynandersonartist.blogspot.com/2015/03/anderson-workshop-in-brief.html

Something about color
Isaac Newton separated sunlight into wavelengths of light with a prism and demonstrated color is a property of light. The wavelength of visible light has a pattern of color ranging from violet to red. The colors do not jump around at random. Just as value has a pattern, so does color. Color temperature (warmer-cooler colors) is a relative value, never an absolute value, and color can change with changes in light. Identifying the light source as either warmer or cooler will simplify the visual information and help the painter observe and mix colors.
http://carolynandersonartist.blogspot.com/2015/03/something-about-color.html

Do you see blue like I see blue?
It is quite likely we don’t see color the same. Experiments have shown that if we have a name for a color, we may see it in a different way. Naming and seeing are connected and what we see changes according to whether or not the language centers of the brain are activated.
http://carolynandersonartist.blogspot.com/2015/05/do-you-see-blue-like-i-see-blue.html

Disney meets Sorolla
A brief explanation of color temperature and how to see warmer-cooler colors.
http://carolynandersonartist.blogspot.com/2015/07/disney-meets-sorolla.html

The creativity crisis
American creativity scores are declining. Recent research shows how children have become “less perceptive and less apt to connect seemingly irrelevant things.” The ability to find abstractions, unseen patterns and alternative meanings is dependent on using both convergent and divergent thinking. Unfortunately, it is easier and more comfortable to deal with what we already know (and think we see).
http://carolynandersonartist.blogspot.com/2015/08/the-creativity-crisis.html

Four ridiculously simple ways to improve your painting
Stop and look. Stand comfortably with a good view and remember to step back. Squint! And don’t forget to mind your brushes.
http://carolynandersonartist.blogspot.com/2015/10/four-ridiculously-simply-ways-to.html

Color constancy and why some of the science is wrong
Color constancy is a feature of color perception that ensures the color of an object will remain relatively constant under varying illumination. Some neuroscientists claim we are incapable of bypassing this basic function of visual processing. It is apparent, however, that artists have learned to evaluate color information in a way that can more accurately process the quality and type of the light and perceive the ensuing changes in the colors of objects and shadows.
http://carolynandersonartist.blogspot.com/2015/12/color-constancy-and-why-some-of-science.html

Where’s all the art and other interesting stuff
Most museums consider archiving, storage, and conservation to be their primary purpose. Only a tiny fraction of art is actually available for people to view and enjoy. Also, do people who grow up in the arctic see better in the dark? Well, yes, so read this to find out how and why. Let’s also explore nature’s fractal patterns and discuss “how real is reality?”
http://carolynandersonartist.blogspot.com/2016/01/wheres-all-art-and-other-interesting.html

Intuition is just another form of pattern recognition
Intuition is not magic. It is not some mystical sixth sense. And it is not the opposite of rational thinking. Intuition is pattern recognition outside the normal range of conscious thought. We have a tendency to favor language based, rational thought and relegate intuition to the hinterlands of unexplained phenomena. In painting, if we insist on describing objects by name, we are more likely to favor fidelity to perceived realism and not to interpretation. In order to foster a different path of pattern recognition, it’s necessary to describe the information in a new way.
http://carolynandersonartist.blogspot.com/2016/07/intuition-is-just-another-form-of.html

Do facts matter or is truth just another possibility?
Why do we accept dogma for truth and is there value in trying to understand new information? Our color primary system of red, blue and yellow predates modern scientific color theory. The more accurate primaries for subtractive color are magenta, cyan, and yellow. This might not be important for many painters, but for anyone using a limited palette, the updated primary colors make far more sense and allows for a wider range of color mixtures. And on another note, let’s explore our misleading world map and other misperceptions such as the fact you really are not life-size when viewing yourself in a mirror.
http://carolynandersonartist.blogspot.com/2016/09/do-facts-matter-or-is-truth-just.html

A win for visual truth
Interesting that shortly after I wrote the previous post about the inaccuracies of our world map, I came across an article about a designer who created a solution to this problem: triangles. Hajime Narukawa was able to preserve the proportions of water and land by dividing the globe into triangles, projecting them onto a tetrahedron and then unfolding the tetrahedron into a rectangle.
http://carolynandersonartist.blogspot.com/2016/11/a-win-for-visual-truth.html

Color: fact, fiction and perception
Another attempt to try and break down color information and explain color temperature.  This is difficult since how we see color is dependent on science, perception and psychology.  Important: The illustration of the wavelengths of light is not a scale of color temperature. How we interpret colors as warmer or cooler is not based on science, but on perception and psychology. Color temperature is never an absolute value, as in warm or cool, but always comparative, e.g. warmer, cooler. The sun is not really yellow and our perception of color as a circular, continuous spectrum is just that – a perception.
http://carolynandersonartist.blogspot.com/2016/11/color-fact-fiction-and-perception.html

Lunch with the Mad Hatter
A friend’s very insightful and hilarious rendition of a particularly challenging portrait commission.
http://carolynandersonartist.blogspot.com/2016/11/lunch-with-mad-hatter.html

Posted by Carolyn Anderson at 3:33 PM No comments: