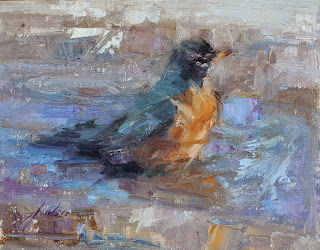 For various reasons it is quite likely we don’t see color the same. The names for the colors of the rainbow are arbitrary constructions. The Russian language, for example, has two separate words for the color “blue” found in the rainbow. Most of us have just one word for the same color. Does this make a difference in how we “see” the color?

Recent experiments have shown that if we have a name for a color, we are quite likely to see it in a different way. Naming and seeing are connected and what we see changes according to whether or not the language centers of the brain are activated. (The Secret Language of Color)

The language of color differs depending on where you live. There are evidently still tribes that don't have color names beyond black and white. It is also interesting that the naming of colors across all cultures has a distinct pattern. Black and white are always the first to be named. Red is next. After that, there are variations in the naming of color, but usually yellow or green follow, then blue or violet. Colors such as orange and pink appear later.

The colors of the rainbow have changed over time. As late as the twelfth century, the arc was portrayed with only red and green and a band of white in the center. The rainbow didn't take on additional hues until the Renaissance, and it wasn't until the eighteenth century and Newton that we acquired the colors of the rainbow as we know them today. And then there is the Russian language which has two words for blue, “goluboi” for light blue and “sinii” for dark blue. This distinction is similar to the English language separation between pink and red.

Not having a name for a color does not mean a person can’t see the color. Linguists spent two centuries arguing about whether or not a person who didn't have a name for a color could actually “see” the color. We know now that is not true. We are starting to recognize, however, that the complexity of visual processing is both enhanced and inhibited by the language centers of the brain.

"The Secret Language of Color" by Joann Eckstut and Arielle Eckstut
"Through the Language Glass: Why the World Looks Different in Other Languages" by Guy Deutscher 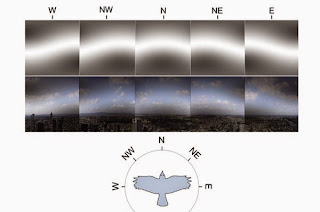 Posted by Carolyn Anderson at 1:10 PM