Modern technology has confirmed an unpopular truth that has been overlooked or ignored by art history for centuries. The figures of gods and heroes created by Greek and Roman artists were once painted in brilliant colors. Marble was considered a canvas, not the finished product. 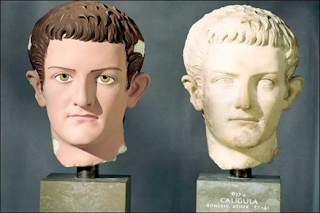 The myth of whiteness in classical sculpture began with the rediscovery of Greco-Roman sculpture during the early Italian Renaissance. While the durability of marble allowed the sculptures to survive the centuries, the paint did not survive. Buried objects retained more color, but traces of paint were often brushed or washed off during cleaning. The statues were understood to be from classical antiquity and were regarded as ideal models of artistic achievement. They had a profound influence, not only on Renaissance artists, such as Donatello and Michelangelo, but also on all art that followed. The misinterpretation of ancient sculpture began with an honest mistake, but as new evidence was found to suggest the sculptures were painted, the myth persisted.

When the ancient Roman cities of Pompeii and Herculaneum were excavated in the mid-eighteenth century, the noted art historian Johann Winckelmann saw some of the artifacts and noticed the remnants of color, but chose to ignore the evidence. Instead, he attributed a statue of Artemis, with red hair, red sandals, and a red quiver strap, as Etruscan rather than Greek. He declared, “The whiter the body is, the more beautiful it is.” In Germany, Goethe declared that “savage nations, uneducated people, and children have a great predilection for vivid colors.” 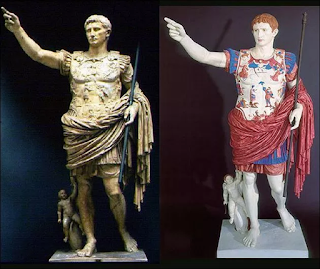 Major excavations in the nineteenth century exposed more painted reliefs and sculptures, but scholars who tried to discuss polychromy (the art of painting sculpture) were dismissed. The great sculptor Auguste Rodin supposedly said, while pounding his chest, “I feel it here that they were never colored.”

Willful blindness had taken hold and the myth persisted.

Art restorers, art dealers, and even museums felt it necessary to scrub and polish Greek and Roman objects to a pristine whiteness. The core identity of Western civilization was built on a story of Greek superiority, and that included the perception of white marble statuary as a standard of beauty. Recently, however, modern technology and technical innovation have reaffirmed what is, without a doubt, the truth: the classical ideal of white marble statues is based on a lie. Greek and Roman statues were painted.

In the 1980’s, Vinzenz Brinkmann, while pursuing a degree in classics and archaeology in Munich, used a special lamp to highlight the surface relief on statuary. While finding little evidence of tool marks, he did find significant evidence of polychromy. He soon realized, however, that this discovery did not necessarily require a special lamp. He recalled some of the pigment “was easy to see, even with the naked eye. It turns out vision is highly subjective.”

Mark Abbe was a graduate student working in the ancient city of Aphrodisias (in present-day Turkey) in 2000, when he first saw statues with flecks of color: red pigment on lips, black on hair, and gilding on limbs.  “The visual appearance of these things was just totally different from what I’d seen in the standard textbooks . . .” Now a professor of ancient art and a leading scholar of Greek and Roman polychromy, Abbe says the idea the ancients disliked color “is the most common misconception about Western aesthetics in the history of Western art.” 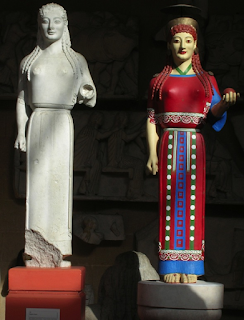 In recent years it’s become easier to detect pigments from the fragments of paint that remain. Brinkmann and his wife, Ulrike Koch-Brinkmann, began recreating Greek and Roman sculpture with an approximation of their original colors. “Gods in Color”, an exhibition of these replicas, began in 2003 and toured twenty-eight cities. Some scholars, however, while supportive of the work, have noted the reconstructions are too opaque and flat. Plaster, which the replicas were made of, absorbs paint, while marble does not. They have also noted the lack of nuance and individual style which they presume would have been evident in the originals.

There is optimism that more information and other types of reproductions, such as digital reproductions, will permit a more nuanced and naturalistic interpretation of how these ancient statues once looked. Museum curators are beginning to reevaluate their exhibits. Enhanced displays, better museum signage, and computerized light projections will help to correct the misinformation about Greek and Roman sculpture.

Only time will tell, however, if the myth is more powerful than the truth.

The Myth of Whiteness in Classical Sculpture by Margaret Talbot, The New Yorker
Gods In Color

Posted by Carolyn Anderson at 6:53 AM