A while back I posted an article titled “Do facts matter or is truth just another possibility?”. I wrote about our outdated, misleading primary color system and the confusion it can cause. I also mentioned the inaccuracies of the most commonly used world map (Mercator) and how its distortions affect our perceptions. In a follow-up article “A win for visual truth” I covered a new design for a world map, called the Authagraph Map – it looks strange, but is far more accurate than the Mercator map. I don’t know that we will soon be using a more accurate color primary system, or a more accurate world map, but I do hope that we can learn new information and resist the temptation to treat our version of reality as some kind of worn-out shoe that we keep around just because it’s comfortable.

Now along comes an article from Wired.com – another great example of misleading perceptions, how more information is better information, and how nuance can be as important or even more important than simplicity.

Is the US Leaning Red or Blue? It All Depends on Your Map

by Issie Lapowsky, Wired.com
For the complete article click here.

On May 11, 2017, a reporter named Trey Yingst, who covers the White House for the conservative news network OANN, tweeted a photo of a framed map of the United States being carried into the West Wing. The map depicted the 2016 election results county-by-county, as a blanket of red, marked with flecks of blue and peachy pink along the West Coast and a thin snake of blue extending from the northeast to Louisiana. It was a portrait of the country on election night, but on Twitter, it was also a Rorschach test. 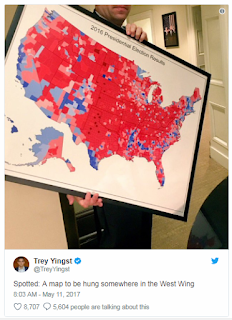 Conservatives replying to Yingst's tweet interpreted the expanse of red as proof of their party's dominance throughout all levels of government. Liberals viewed the map as a distortion, masking the fact that most of that redness covers sparsely populated land, with relatively few voters.

In reality, both sides are right, says Ken Field. A self-proclaimed "cartonerd," Field is a product engineer at the mapping software company Esri and author of a guidebook for mapmakers called Cartography. The problem, he says, isn't with people's partisan interpretation of the map. The problem is believing that any single map can ever tell the whole story. "People see maps of any type, and particularly election maps, as the result, the outcome, but there are so many different types of maps available that can portray results in shades of the truth," Field says. "It’s a question of the level of detail that people are interested in understanding."

It stands to reason that President Trump would want that particular map hung in the West Wing. There is an awful lot of red on it. But focusing on that map alone could lead Republicans to overestimate their advantage, and lead Democrats to misunderstand the best ways to catch up. That's one reason why Field recently published an extensive gallery of more than 30 alternative maps designed to tell markedly different stories about what happened on election night 2016.

"All of these maps show different versions of the truth," he says. "None are right, and none are wrong, but they all allow you to interpret the results differently."

Take the map Yingst shared, for example. In the language of mapmakers, it’s a “choropleth diverging hue map.” The term “choropleth” refers to maps that use color or shading to visualize a given measurement. In this case, the map uses either the color red or blue to indicate which party won a given county. It’s accurate, and it’s familiar. These colored county-level or state-level maps are some of the most commonly used to illustrate the results of an election. But, Field says, they also lack nuance. There’s nothing on that map to indicate to the viewer, for instance, that fewer votes were cast in the rural mountainous regions of Montana than in Manhattan.

Understanding that nuance—or lack thereof—is key heading into the 2018 midterms, when amateur cartographers will no doubt climb out of Twitter’s recesses to proclaim their definitive readings of electoral maps. Here’s what we can learn from just a few of Field’s examples: 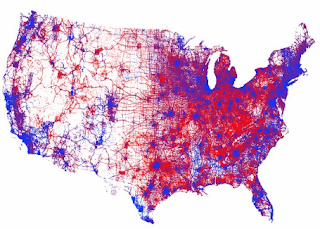 To Field, there's no such thing as a totally comprehensive map, but he says, "Some are more truthful than others." The so-called dasymetric dot density map is one of them. The term “dasymetric” refers to a map that accounts for population density in a given area. Instead of filling an entire state or county with the color red or blue to indicate which party won, Field uses red and blue dots to represent every vote that was cast. On this particular map from 2016, there are roughly 135 million dots. Then, rather than distributing the dots evenly around a county, he distributes them proportionally according to where people actually live, based on the US government's National Land Cover Database. That’s to avoid placing lots of dots in, say, the middle of a forest, and to account for dense population in cities.

Taken together, Field says, these methods offer a far more detailed illustration of voter turnout than, say, the map in Yingst’s tweet. That map uses different shades of red and blue to indicate whether candidates won by a wide or slim margin. But by completely coloring in all the counties, it gives counties where only a few hundred votes were cast the same visual weight as counties where hundreds of thousands of votes were cast. So, the map looks red. But on the dasymetric dot density map, it’s the blue that stands out, conveying the difference between the popular vote, which Clinton won, and the electoral college vote, which Trump won.

Shades of Red and Blue 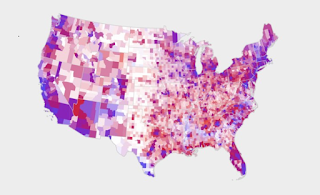 The value-by-alpha map is similar to the dasymetric dot density map, and in some ways, even simpler. It doesn’t account for where votes were most likely cast within a county. Instead, it uses color to indicate the party’s vote share in each county, and opacity (in mapmaking, it’s called the “alpha channel,” hence, value-by-alpha) to indicate the population in a given area of the county. A bright, vibrant blue indicates a high Democratic vote share in a densely populated area. A light pink indicates a high Republican vote share in a sparsely populated area. Purples portray areas where one party or another won by a narrow margin.

What you notice first when you look at the map is that the solid red wall extending from North Dakota to Texas on the map Yingst shared is almost white in this rendering. What you notice second is just how much purple there is everywhere else. It’s a good reminder of what people often forget about the 2016 election: “It was very close,” Field says. President Trump won Michigan, Wisconsin, and Pennsylvania, the three states that clinched his victory, by about one percentage point or less.

The View from Above 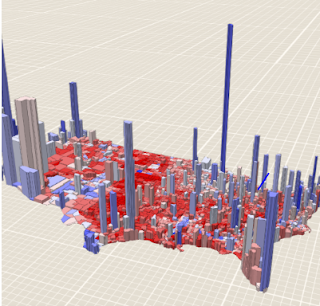 See link to article above for the complete interactive map.
What Field likes most about the 3D prism map is how people react to it. “It’s just cool. People like 3D stuff,” he says. But it also illustrates an important point. Counties are colored red or blue, based on which party won, but the vote totals are portrayed in three dimensions, where the height is equal to the number of votes cast for the winning party. Because Clinton predominantly won big cities, where more votes are cast, it creates a map that looks a bit like a city itself, with dozens of mile-high blue skyscrapers jutting out from between red row-homes and strip malls.

Click around the map and you’ll see that viewed from above, it looks not unlike Trump's map—all in red. But click to tilt the map and it’s mostly blue spikes. It demonstrates perhaps more effectively than any of the other maps how President Trump won in 2016, Field says. “You had a Republican who was very successful in getting the smaller areas to vote Republican, while the larger populated major cities went Democrat,” he says.

Posted by Carolyn Anderson at 11:29 AM