Next winter, if you are fortunate enough to enjoy a bright, sunlit, snow-covered landscape, remember you are looking at all the colors of the rainbow. When sunlight hits snow, its full spectrum of wavelengths is almost entirely reflected back at us – every spectral color – red, orange, yellow, green, blue, and violet.


“Science is nothing other than the search to discover unity in the wild variety of nature, or more exactly, in the variety of our experience. Poetry, painting, the arts are the same search for unity in variety.” J. Bronowski (1908-1974) was a British mathematician, historian of science, theatre author, poet and inventor. He was also the presenter and writer of the 1973 BBC television documentary series and accompanying book The Ascent of Man.


“The measure of aesthetic value is in direct proportion to order and in inverse proportion to complexity.” George David Birkhoff (1884-1944) was another prominent mathematician who proposed a theory of measuring beauty in the book Aesthetic Measure.

Birkhoff defined a typical aesthetic experience as a combination of three successive phases: (1) the act of attention, that increases proportionally to the observed object’s complexity (C); (2) the feeling of value or aesthetic measure (M); and (3) the realization that the object is characterized by a certain harmony or order (0). The mathematical formula he proposed defined the relationship of the three phases.

While the proposal of a formula to measure aesthetics may be interesting to some, most of us would probably just experience an eye-crossing moment of “huh?” But the take-away on this is the recognition of the relationship of simplicity and complexity, or as Bronowski pointed out – the unity in variety. Complexity is responsible for increasing the observer’s attention. Simplicity and the perception of order and pattern trigger a sense of answer or completion – a brief aha moment of “yes, this makes sense”. This is merely recognition of orderliness in a universe that is also dynamic and continually changing.

Order and change, unity and variety, and simplicity and complexity are complementary. They co-exist in a continual feedback and response loop. How these elements coexist, and in what kind of proportional relationship, determine how a painting, or any other object we choose to create, looks and feels.

The visual aesthetics of snowflakes

Simplicity and complexity were the focus of researchers at Western Kentucky University who set out to quantify aesthetic experience by asking subjects to rate the perceived beauty of snowflakes and solid objects. Participants were presented with a set of ten snowflake silhouettes created from photographs of natural snowflakes that varied in complexity and ten randomly-shaped, computer-generated, solid objects that also varied in complexity. The results for the solid objects showed a preference for both the most and least complex objects, while moderately complex objects were rarely selected. The results for the snowflakes, however, were different. The least complex snowflakes were almost never chosen: 91 percent of participants perceived only the complex snowflakes as the most beautiful.

The infinite variety of snowflakes 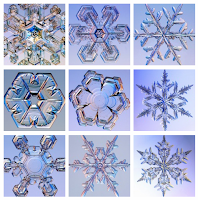 We have a tendency to overlook complexity when categorizing and visualizing information. The iconic image of a paper cut-out snowflake is probably the first visual that comes to mind when one mentions the word “snowflake”, but it’s suggested from the WKU study that people respond positively to complexity in natural forms when given a choice. It is also possible people are responding to complexity in conjunction with, not apart from, a sense of perceived order.

Chaos and order are defining features of the natural world. While the basic structure of a snowflake is determined by the scientific process of crystallization and all snowflakes start out in the same way, the actual formation of a snowflake is dependent on more chaotic atmospheric conditions, such as temperature and humidity. A snowflake’s growth is one of both order and chaos. No two falling snowflakes will meet precisely the same circumstances on their way to the ground; even the appearance of symmetry will be an illusion since the microscopic space of the growing crystal will contain subtle differences.

Posted by Carolyn Anderson at 10:12 AM