Breaking the "rules" and changing the parameters of perception

“When the great English painter Sir Joshua Reynolds explained to his students in the Royal Academy that blue should not be put into the foreground of paintings but should be reserved for the distant backgrounds . . . his rival Gainsborough – so the story goes – wanted to prove that such academic rules are usually nonsense. He painted the famous ‘Blue Boy’, whose blue costume, in the central foreground of the picture, stands out triumphantly against the warm brown of the background.”

(E. Gombrich, The Story of Art)

The complexity and endless variety of color information should make any painter wary of rules that limit possibilities. The history of art reveals a pattern of experimentation, innovation, and visual interpretation that form a fascinating time-line of both continuity and change.

Artists have dealt with these limitations for centuries. There is not one solution for interpreting a three-dimensional scene on a two-dimensional surface using pigments which can never equal the contrast range or the colors we actually see.  But great artists throughout various periods of art history made one discovery after another that allowed them to interpret and create a convincing picture of the visible world.

The use of oil paint in the fifteenth century led to a greater range of rich colors and smooth gradations of tone.  There was the discovery of linear perspective, atmospheric perspective, and the use of strong tonal contrast known as chiaroscuro. Over the centuries artists refined these techniques and learned to optimize their command of value pattern and luminance to represent depth on a two-dimensional surface.


Value (luminance) determines our perception of depth, three-dimensionality, movement, and spatial organization. Perceiving light is simpler than discriminating what wavelength (color) it is.

Towards the end of the nineteenth century, there was a break with tradition when artists rebelled against the teachings of the academies and what they saw as predictable and uninspired painting. They realized traditional art, with its emphasis on defining objects with careful shading, did not reflect the reality of the scene outside the window. There are harsh contrasts in sunlight, shadows are not uniformly grey, black or brown, and reflections of light and the kind of light affect our perception of color.

These artists, known as Impressionists, set out on a path of discovery - the exploration of light and color. Empowered by the invention of the tin paint tube, they took painting outdoors to create unplanned and spontaneous paintings. Even those who remained studio painters, such as Edgar Degas, shared an interest in scenes that appeared unplanned and spontaneous, as if capturing a split-second glimpse of the world. The advent of photography and exposure to Japanese prints expanded the acceptance of compositions which were once considered unbalanced and incomplete.

The Impressionists, in a radical departure from Renaissance ideals, emphasized light and color, and the transitory nature of visual reality, instead of value and rounded, modeled, solid form. Their use of color changed painting in new and challenging ways, and the change was dramatic. What mattered in painting was not the subject, but the way in which it was translated into color. The old rules of predictable compositions, correct drawing and idealized or picturesque subject matter were set aside for new freedoms of expression in painting. But while the Impressionists were painting a new chapter in art history, some artists found the brushwork and flickering color too messy and incomplete.

The Post-Impressionists, such as Cezanne, Seurat, Gauguin, and Van Gogh, brought a desire for order and solid form to the fleeting observations of the Impressionists, but did not want to return to the traditional methods for defining space and modeling form. These artists, while distinctively different from one another, worked to reconcile the pattern and solidity of visual reality with the brilliance and luminosity of color.

The pattern of innovation and change continued as each artist explored various facets of representation. Their work inspired other artists who moved in even different directions. The pointillism of George Seurat inspired Paul Signac’s paintings. Signac’s use of pure color in complementary pairs inspired Henri Matisse. Matisse and fellow painter Andre Derain continued the use of complementary color, but substituted painterly brushwork for the dots used by Signac and Seurat,  All of these painters expanded the dialogue of visual language and changed our ideas about visual interpretation. 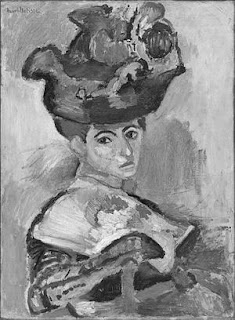 Color is a property of light and light is not a random scattering of color. Wavelengths of light that we can see range from the longest (red) to the shortest (violet). The pattern of visible light is red, orange, yellow, green, blue, and violet. The colors merge seamlessly from one to the other. We see these colors because of the receptors in our eyes that are responsive to this narrow range of wavelengths. Objects absorb or reflect particular wavelengths of the visible spectrum. What we see are the wavelengths that are reflected back.

We rarely perceive pure colors, and the colors we do see depend on the available light source. When the light changes, the number and ratio of wavelengths also change.
Posted by Carolyn Anderson at 11:34 AM