Summary: Painting is a combination of chess and making breakfast. Combining the two requires some dancing. Robots can’t dance. And the next time you’re in front of your easel, try actually listening to your painting instead of always talking over it. Feedback and response is a good thing.

Robert Genn (1936-2014) was a well-known Canadian painter and author of the Painter's Keys web site which he started in 1998. The site mails out a twice-weekly newsletter, and is currently run by Robert’s daughter Sara. You can sign up for free at The Painter's Keys. Following is an excerpt from a letter titled “The Intuitive Flow” originally published by Robert Genn on February 11, 2000.

“To what degree do we pay attention to our progress and to what degree do we just let it flow? My observation has been that there are times to give thought and other times when thought may be dangerous. Most of us have noticed how too much thinking can lead to poor or contrived work. Many of my outright failures have occurred when I wanted so badly to succeed, brought every brain cell to bear and fell down miserably. It makes you realize that something other than the cerebral cortex is necessary. Consider the centipede. If this lowly being paused for only a moment to determine which foot to move forward next, it would undoubtedly stumble. The centipede has rhythm and flow in its hundred legs precisely because it does not have to think about it. Consider this the next time you move the instruments of your art. At what point in the act of art does a natural power or a mysterious intuition seem to guide and generate excellence?

"Among the artists I know, admire and compete with, I've noticed the following: They understand the basics. They train themselves. They perfect the details and trivialities of what they do. They master their stances and their strategies. Then they put their heads down, close out the crowd and let it flow.

"Balancing your calculating brain and your intuitive flow is an easy dream and a difficult task. I think it's one of the true miracles.” (Robert Genn)

In September of 2016 Uri Bram posted an article titled “The Limits of Formal Learning, or Why Robots Can’t Dance.” He interviewed David Chapman, one of the first researchers to apply the mathematics of computational complexity theory to robot planning. Chapman suggested AI researchers address the challenge of teaching a robot to dance. “Dancing,” Chapman said, “was an important model because there’s no goal to be achieved. You can’t win or lose. It’s not a problem to be solved… Dancing is paradigmatically a process of interaction.”

Since most AI research revolves around task-oriented problems, ones with definite goals and a rigid structure, teaching a robot to dance would present unique problems. Chapman emphasized development over learning. Learning implies completion while development is an “ongoing, open-ended process. There is no final exam in dancing, after which you stop learning.”

One could argue the successful use of formal reasoning in areas such as science, engineering and mathematics has placed too much emphasis on logic-based, linear thinking and overlooked all the information being processed and working in the background. As the German philosopher Martin Heidegger pointed out, routine practical activities, such as making breakfast, are skills that do not seem to involve formal rationality. Our ability to engage in formal reasoning seems more likely to rely on our ability to engage in practical, informal, and embodied activities. He suggested most of life is unlike chess, and more like breakfast.

Heidegger’s observation on chess and breakfast is similar to Annie Dillard’s explanation of the mind/body  dilemma.  “The mind wants to live forever, or to learn a very good reason why not. The mind wants the world to return its love, or its awareness; the mind wants to know all the world, and all eternity, even God. The mind’s sidekick, however, will settle for two eggs over easy. The dear, stupid body is as easily satisfied as a spaniel. And, incredibly, the simple spaniel can lure the brawling mind to its dish. It is everlastingly funny that the proud, metaphysically ambitious, clamoring mind will hush if you give it an egg.”

Somewhere between chess and breakfast, the innate movements of the centipede Genn mentioned and Chapman’s robot is a place where it is possible to exceed our own expectations.

In the book “The Wayward Gate” Philip Slater  wrote, "Imagine life as a complicated dance. When we're thoroughly "into" the dance we don't have to analyze it in order to participate in a creative and harmonious way, no matter how rapid and intricate it becomes. But occasionally we're distracted, get self-conscious, lose confidence, trip, collide with someone, get out of synchrony with the rest. At such times we may mentally step out of the situation, look around, and try to figure out where the dance is going and where we fit in. Like children jumping rope, we adjust our timing for a few turns and then, when we're back in tune, leap in and again relinquish rational control in favor of a more instinctive kind of coordination.”

Slater went on to say rational control is a necessary device and useful for restoring balance, but destructive when we become dependent on the illusion of control. “I said rational control was a way of getting back in the dance when we’d lost our footing. But sometimes we get dazzled by the intricacy of the dance and forget about getting back in.” The need to understand the whole dance, not just our part in it, leads us to want control, to “reproduce it, mechanize it, and make sure we never lose our place again."

"My wish to understand . . . comes from my particular place in the dance – nine thousand and thirty-third whirler from the left, spinning on one of those bumpy places that make people lurch every so often. Lurching gives me a desire to grasp that the dance as a whole doesn’t share. The most grandiose, ‘objective’ theory in the world, in other words, is just a complicated personal effort to find one’s own place in the dance.  . . . Of course, from another point of view even lurching is just part of the dance, and so is stepping outside the dance, and so is trying to analyze and control the dance . . . They’re all just dances . . . and you’re just dancing.” 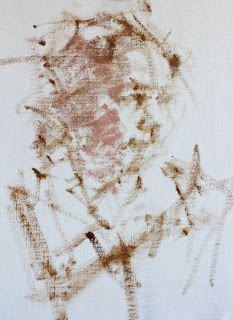 Posted by Carolyn Anderson at 9:10 AM